This site requires Javascript for general functionality regarding searches and applying/validation for courses. Please enable Javascript for this purpose. Hundreds attend webinar with The Crown make up artist and hair designer | Wiltshire College & University Centre Skip to Content

A make-up artist and hair designer, who worked on the multi-award winning series The Crown, has spoken exclusively to Wiltshire College & University Centre.

Cate Hall chatted to Media Make-Up lecturer Laura Lawrence in a gripping live webinar that was attended by more than 200 people on Thursday 4th February.

The 38-year-old, who lives in Berkhamspted, joined the Netflix drama series in 2018 to establish the cast for seasons 3 and 4.

She is proud to have commanded one of the top designing jobs in the industry overseeing the incredible transformations of Elizabeth Debick as Princess Diana, Gillian Anderson as Margaret Thatcher and Helen Bonham Carter as Princess Margaret.

Laura Lawrence, who is a huge fan of The Crown personally, as well as an admirer from a professional perspective, said: “It was an absolute pleasure to interview Kate and I was in awe the whole time.

“I couldn’t believe how popular the webinar was, although The Crown is an incredible show.

“My students said they thought the talk was inspiring and gave them a good insight into the industry with another view of the full media make-up course Cate studied and how that in itself can open up doors into the industry.”

During the webinar, Cate, who studied Drama At Bristol University and then went on to specialise in Hair and Make Up design whilst at the Delamar Academy in London, spoke about her journey into the industry, films and productions she had worked on, including Agatha Christie’s movie Crooked House, Spooks, Churchill, A United Kingdom, and The Woman in Black 2.

The College hosted the live webinar for staff, students and the public and those attending were delighted to have the opportunity to ask Cate questions.

Tia Whitehall, a Level 3 Theatrical Media Make-up student based at the Chippenham campus, said: “Cate went into so much detail about the detail they have to go into when creating the looks for The Crown. It was a really good talk and great to learn about the best routes into the industry.”

Fellow Level 3 Student Jessica Pollen said: “The webinar was a great insight into what movie make-up and hairdressing jobs are like; it answered a lot of questions about that job I never thought I’d be able to find out. Make-up is what I want to specialise in, but it was good to learn from Kate that having hairdressing skills too is really important.”

College staff also enjoyed listening to the webinar. Hairdressing lecturer Diane Stevens said: “I personally found this truly inspiring. I have been off work recently due to a bereavement and for the first time in weeks I felt a string of excitement. For that hour, I was transported into a different world and I’m so thankful. Both Laura and Cate were fantastic. Cate was so down to earth and happy to answer any questions which was wonderful for everyone who joined in.” 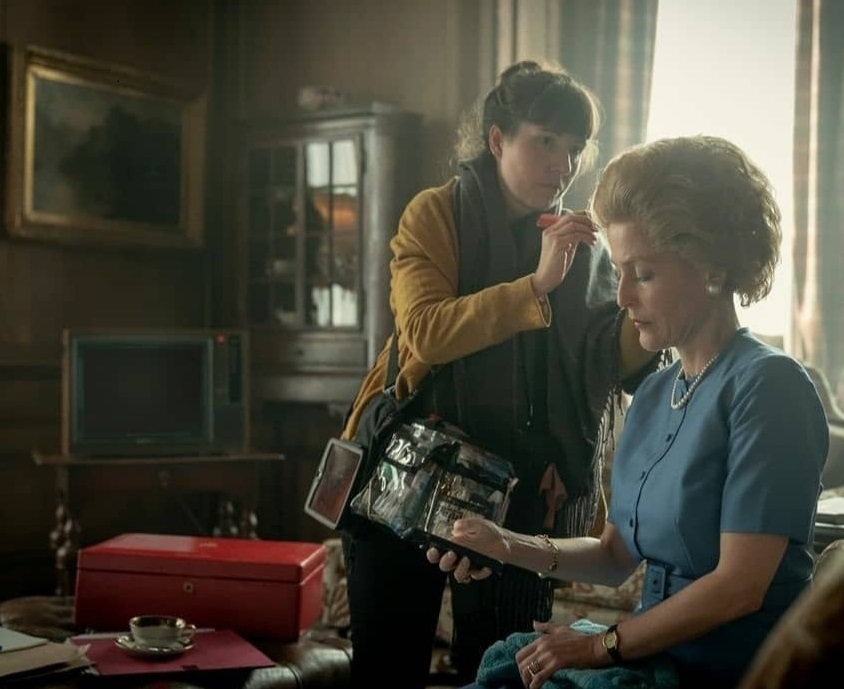