This site requires Javascript for general functionality regarding searches and applying/validation for courses. Please enable Javascript for this purpose. Former BA Film & Cinematography student gets one of the rarest jobs in the… | Wiltshire College & University Centre Skip to Content

Charlotte Hayde has one of the rarest jobs for young people in the industry working for Cinelab as a Film Scanning Operator.

It was during a university level project at the Salisbury campus, where Charlotte studied the renowned BA Film & Cinematography degree, that she first learned about the shooting on film and fell in love with the craft.

She said: “I had a really inspiring lecturer at university who was really passionate about the use of film and made me want to learn more.

“We worked on some 16 and 35mm projects and actually came to Cinelab to get them developed and scanned.”

Wiltshire College & University Centre is one of few providers across the country to still use film to shoot, with the majority using only digital techniques.

After visiting the lab, Charlotte reached out for work experience and went on to earn a role there. One of her very first responsibilities included helping the team remaster Wham! - Last Christmas in 4k.

She said: “It was an incredible opportunity to work on this project and the response the re-release received was outstanding, wracking up millions of views within minutes. It was so exciting being a part of something this influential.

“Even though the negatives were in perfect condition, it was still a little nerve-wracking handling them! But it was such an honour to be able to view the original reel as we scanned it in.”

Based in London, Cinelab is the only lab in the world processing all colour negative motion picture film formats. It also specialises in commercials and archive and restoration.

To watch the Christmas classic from Wham! that Charlotte worked on, click 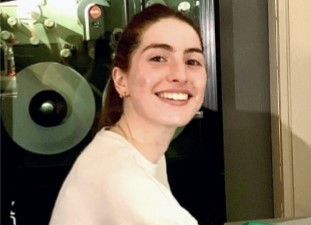